4kviews
28shares
Grounded Life Travel is supported by its audience. When you purchase through links on our site, we may earn an affiliate commission.As an Amazon Associate I earn from qualifying purchases.

When we started planning our trip to Switzerland, one of the main reasons we wanted to go was to ride the Bernina Express. During this magical trip, the train passes through 55 tunnels and goes over 196 bridges. We had heard of the beauty that can be seen from the train and wanted to experience it for ourselves. Did the experience live up to the hype, and was the Bernina Express worth it?

Is the Bernina Express worth it?

What is it like to ride the Bernina Express

First Class on the Bernina Express

Riding in first class on the Bernina Express is worth it if you are able to get the side with 2 seats by themselves that are facing each other with a table. If you are in the section of 4 seats, there is almost no difference between first and second class.

Unfortunately, the tables on the Bernina Express are really small, and even in first class, they don’t allow the outside passengers a place to use the table.

You aren’t really meant to eat meals on the Bernina Express, but the lack of a table seemed problematic for several passengers on our train. Those sitting on the outside were less happy about their seat than those on the inside, especially if they didn’t know the people next to them.

The second class seats have the same table, but slightly narrower seats. The windows are the same, so the only real difference is the width of the seats.

If however you get a seat in first class on the side with only 2 seats, that is the best way to go.

These seats give you the most room to stretch out, a guaranteed window seat, and a private table.

Are there luggage racks

We didn’t see anyone take a book, but we saw a few people wish there were luggage racks! Here is a shot of the luggage racks in 2nd class.

How to buy tickets on the Bernina Express

To ride the Bernina Express you’ll need both a seat reservation and a ticket. If you have the Swiss Travel Pass, that counts as your ticket, so you’ll only need to buy the seat reservation. If you won’t have the Swiss Travel pass you’ll need to buy both. Tickets for the Bernina Express can be booked online at the Rhaetian Railway website.

Step 1: Once you click on book tickets you’ll be greeted with this form.

Type in your beginning and ending stations as well as the date of travel, trip type and class. Hit Next.

Step 2: Pick which train you want from the times listed. Some dates only have 1 train. At the bottom of the screen you’ll see a seat map. Light green seats are available, dark green seats are your selected seats and gray seats are unavailable. The seats at the top of the chart in a single line are first class seats on the side with only one seat. If you can get them, these are the best seats. For example in this picture, seats 21 and 22 would be private seats facing each other with a table. After choosing your seats click the Next button.

After selecting your pass you’ll note the price has gone down by whatever the cost of the ticket is for your dates.

You can only book tickets 2 months in advance, but you can get seat reservations far ahead of that. Our advice is to book your seat reservation as soon as you think you are going on the trip.

How much does the Bernina Express Cost

Tickets for the full route of the Bernina Express cost CHF 63 in second class and CHF 111 in first class. This covers the route from Chur to Tirano or in reverse direction. A round trip fare is double this price.

You need a seat reservation both ways if you are making a round trip.

Does the Swiss Travel Pass cover the Bernina Express

Does the Bernina Express run all year

The Bernina Express runs all year, including winter. It is available 365 days a year. It is a beautiful ride all year long, but our favorite seasons are late winter, in February and early summer, in June.

Which side is best to sit on the Bernina Express

What is the Bernina Express Route

The Bernina Express is one of the best train routes in the world. Beautiful all year round, there is always something amazing to see around each bend on this ride. The full route stretches from Chur, Switzerland to Tirano, Italy. If you are unable to enter Italy, you can get off at one of the last stops in Switzerland and return from there. On our recent trip, we got off at Campocologno, Switzerland, which is the last place to get off before entering Italy.

Chur is the starting point of the Bernina Express, and a good place to base out of when riding both ways. We stayed in the Hotel Franziskaner, and had a great time there.

The Albula region is known for the famous Albula Tunnel and the beautiful circular routes around the area. The towns that can be seen from the train though are just as stunning.

The prize of the route has to be the Landwasser Viaduct. It is a stunning piece of engineering, and one of the most picturesque sights from a train. Have your camera ready when you approach it the tunnel. It is best viewed heading south from the right side of the train. You’ll also go over it going north, but you’ll have to look back at it.

Here is what the viaduct will look like from in the train.

Ospizio Bernina marks the highest point of the Bernina Express route. At 2,253 meters you should have snow there much of the year. When we passed through this region there were lots of people enjoying themselves by kite skiing.

In the winter this landscape can look like the surface of the moon as far as the eye can see, it is quite a spectacle.

In the summer however, the snow gives way to a lush lake filled mountain range.

Alp Grum is a fun stop where the train will take an extended break and let passengers get off to pose with the Bernina Express sign. If you are visiting in winter, bring your hat and gloves, it will be very cold outside!

At the Brusio Viaduct, the train will make a complete 360 degree turn through the viaduct. It is an absolutely amazing to experience. The best views of the viaduct on are the right heading south and the left heading north.

Which part of the Bernina Express is the best

The best section of the Bernina Express is from the Landwasser Viaduct travelling south to the Brusio Viaduct. To see all of the best sights you need to be on the train from Tiefencastel to Campocologno.

Can you do the Bernina Express in one day

Can you get off the Bernina Express

You can get off the Bernina Express when you want, but it is not a hop on hop off train. You’ll need a new seat reservation and ticket each time you want to board. You should ride this train as far as you can and use regional trains to hop on and off if that is what you want to do.

How long is the Bernina Express

The Bernina Express takes 4 hours and 17 minutes to complete the route from Chur, Switzerland to Tirano, Italy.

Which route is better Bernina Express or the Glacier Express

The Glacier Express is a better train than the Bernina Express. The interior is more luxurious, and there is meal service available on board. As for the scenery, they share the same route for a few hours, and overall the beauty is about the same on both routes, totally stunning.

If you could only pick one train ride, you should do the Glacier Express, but really try to make time to do them both.

What stations does the Bernina Express stop at

You can get on and off the Bernina Express at the following stations:

What to bring with you on the Bernina Express

You should plan to bring a few essentials with you on the Bernina Express. If you go in winter and the sun is out the glare can be incredible, so you’ll want sunglasses.

Best time of year to ride the Bernina Express

The best time of year to ride the Bernina Express is February. You’ll have smaller crowds, beautiful snow filled mountains, and cheaper prices at the hotels. Another amazing time to visit is in early summer, when you’ll still have some snow and you’ll also get to see alpine lakes.

What food is on the Bernina Express

There is no meal service on the Bernina Express. The only food available on board is a food cart with snacks and drinks that will come through the train a few times. If you want to eat a meal, you’ll need to bring it with you on the train. You are allowed to bring food and drinks.

If you are boarding at the Chur station, there are food stands open before the Bernina Express leaves. This food shop was open when we arrived at the station 30 minutes before departure.

Several alternatives exist to riding the Bernina Express, and in many ways they are the better way to ride. If you want to take the Bernina Express one direction and ride regional trains the other way, here is a sample itinerary.

If you have the Swiss Travel Pass you could just hop on any of these routes going north from Campocologno. The morning Bernina Express leaves Chur at 8:32 and arrives in Campocologno at 12:41. Any route going north after that time would work to get you back to Chur.

Other things to note about the Bernina Express

The Bernina Express offers WiFi and it is free to all passengers. While the speeds aren’t incredibly fast, it’ll be good enough to look something up, or send a text or email.

Bicycle transport is not allowed on the Bernina Express. 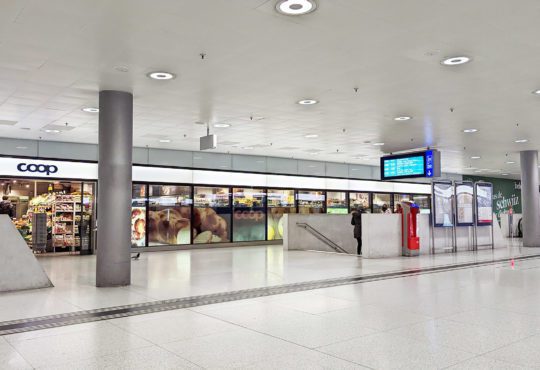 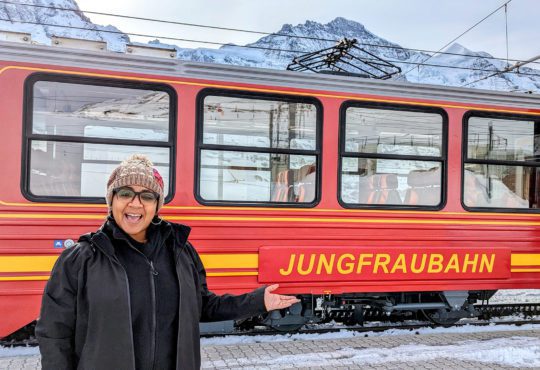 Gornergrat Railway: A Complete Guide To Seeing the Matterhorn By Train